Working as an SAP consultant in the Netherlands 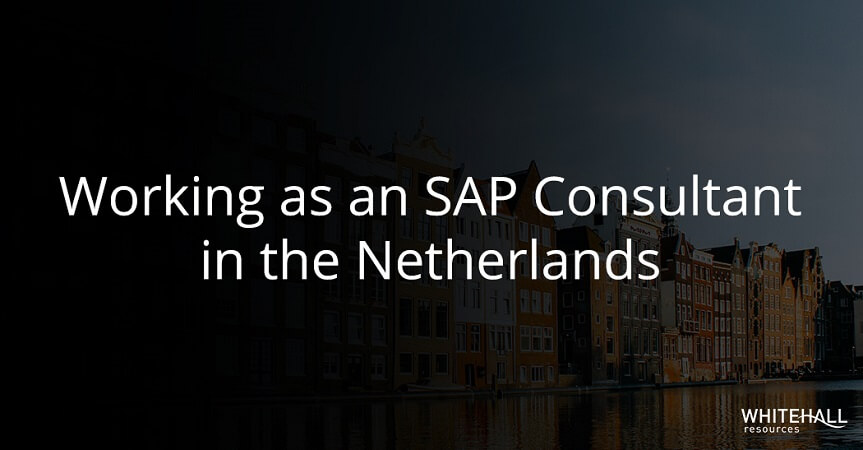 The Netherlands is a highly-organised country with great infrastructure. Its cities are often ranked as some of the most liveable cities in the world due to the Netherlands low crime rate, great transport networks and excellent education system. It is a very cosmopolitan country known for its good lifestyle, cleanliness, open culture and equal rights.

In preparation for Brexit, there has been an increase of companies moving their headquarters to the Netherlands due to its favourable tax climate and multilingual population.

Trust has an important role in Dutch culture and in the workplace. You are expected to show initiative and work independently. Culturally, Dutch people are very direct whilst also being laid back and do not get offended easily.

When attending business meetings Dutch people usually wear suits, introduce themselves by their first and last name and exchange business cards. Making eye contact while shaking hands is important as it is considered a sign of honesty. In the workplace on the other hand, the working culture is informal, there is no dress code and you can refer to colleagues by their first names.

Networking is an important part of business and when looking for a job it can be particularly helpful as the Dutch take personal recommendations very seriously.

Foreign nationals from outside of the EU/EEA, Switzerland, Canada, Australia and New Zealand, require a residence and work permits when intending to work in the Netherlands for more than three months. The hiring company or the employee must apply for these through the Immigration and Naturalisation Service (IND). There are some exceptions to this rule (including your education history), see the IND website for full details. Getting a work permit for contractors from outside the EU is hard for Dutch companies, as they must prove there were no better candidates locally or in the European Union before they can apply. For this reason, most companies in the Netherlands prefer to look for candidates from the EU/EEA or Swiss nationals as they do not require a work permit.

The hourly rates for SAP consultants in the Netherlands are usually higher than in most countries, with the average being 70-100 Euros per hour. When a client is looking for niche skills, rates of pay might increase depending on the length and type of project.

A contract as an SAP consultant is usually for a period of three to six months, although some contracts can be extended when there is a requirement from the client.  Many contractors enjoy extensions and stay for up to two years and in some cases even longer!

Being a hub for the headquarters of many of the largest organisations in the world, there are also permanent positions available in companies with great reputation.

Taxes and getting paid

On arrival to the country, you will need to get a BSN number (Citizen Service Number) as the employer will need to make mandatory contributions on your behalf.

The usual tax rate is around 36 -52%, however as an SAP consultant you can often opt for the 30% ruling. This is a tax advantage for highly skilled migrants moving to the country for a specific role and it is considered compensation for expenses that a foreign employee would have when working outside their home country. This rule will depend on the salary and length of stay. The maximum effective tax rate would be 36%.

Due to the 30% ruling, most employers from the Netherlands do not tend to pay for flights and accommodation when dealing with a new contractor.

The cost of living in the Netherlands is roughly 15% higher than in the United Kingdom, however, as salaries are one of the highest in Europe, SAP consultants can afford a comfortable lifestyle.

Renting is 10-15% higher on average. Housing in the main cities like Amsterdam can be expensive, therefore many prefer to look for options in the surrounding towns. The east side of the country is usually cheaper than the west. The east is also greener and more relaxed, ideal if you prefer not to be in the buzz of a big city.

Find a guide to the cost of living here .

The healthcare system is rated one of the best in the world. Health insurance is mandatory and is deducted from your salary. There are different levels of insurance; the basic level includes medical appointments and treatments, medicine and maternity.

If you hold the European Union Health Insurance Card (EHIC) you will be covered if your stay is temporary. If your stay is not temporary you must take out a Dutch healthcare insurance policy as soon as you have a residence permit.

Amsterdam is known as the world’s capital of cycling, the city is connected with dedicated bicycle lanes and there are more bicycles than humans. Amsterdam is one of the most bike-friendly cities in the world, 63% of residents cycle on their daily commute.

The transport network in the Netherlands is very comprehensive with trains connecting the cities and the countryside. Big cities also have undergrounds and trams, therefore buying a car is not often necessary.

The official language is Dutch, but German, French, Spanish and English are also widely spoken. The language barrier for English speakers is low as the Dutch language has many similar words, making it easy to pick up.

The Netherlands is a democratic country, well known for their tolerance and liberal ideas.

Although very cosmopolitan, the cities have managed to keep their Dutch charm creating the feeling of being in a small town where everyone seems to know everyone.

It is a very international country, and it is common that people from different nationalities live together in the same areas. Each neighbourhood usually has its own market, the best place to get fresh seasonal produce and flowers.

The most popular sport in the Netherlands is football, followed by field hockey and volleyball. Due to being a flat country, cycling is also popular as a leisure activity.

The Dutch are known for Gouda and Emmental cheeses, delicious filled cakes and great coffee. In addition to their traditional food, there is also a big range of worldwide cuisine and Michelin-starred restaurants.

Craft beer is very popular, with new breweries popping up across the country. Two of the biggest beer companies are also based here: Amstel and Heineken.

Location: Which city is best for me?

The big hubs for SAP contracts in the Netherlands are in Amsterdam, Rotterdam, Eindhoven and The Hague. These are all midsize cities with less than a million inhabitants, however there is lots of buzz and the atmosphere is very international.

How do you know which city is right for you?

Many large organisations have their headquarters in Amsterdam, a city known for its great infrastructure.  It has one of the most charming town centres in Europe with the largest concentration of monuments in the country, protected by the UNESCO World Heritage.

There is a huge variety of leisure and entertainment activities from museums and scenery walks to a vibrant nightlife with plenty of restaurants and bars.

Eindhoven has become a hub for technology and design and it is also popular for start-ups. The city has earned the nickname of “Lichtstad” or City of Light due to the presence of the electronics giant, Philips.

It is also a university city with a relaxed atmosphere and great social scene.  There are plenty of attractions and activities focused on technology and innovation, a high amount of parks and recreational areas, art galleries, theatres and budget eating out options.

Rotterdam is the largest port in Europe and it is a contemporary city with unique experimental architecture. It is located 30 minutes away from the Hook of Holland where locals enjoy going to the beach and where you can also take a ferry to England. The city is vibrant and modern, and famous for its art and food festivals.

The cost of living is much lower than in Amsterdam; renting can be up to 80% cheaper. The school system is also very good with many international and bilingual options.

The Hague is the seat of the national government and home to many EU institutions, multinational companies and more than 150 international organisations. It is a wealthy conservative city with a very distinct international atmosphere.

It is also very picturesque with a beautiful coastline, plenty of green areas and a few national parks nearby. For people who like shopping this is the place to find many international brands as well as a variety of chic and edgy boutiques.

Whether you prefer one city or another, working and living in the Netherlands means you are working in an international hub and it is a worthwhile experience.

Click on the map to view Amsterdam’s town centre!