The Internet of Things: From warehouse to wearables 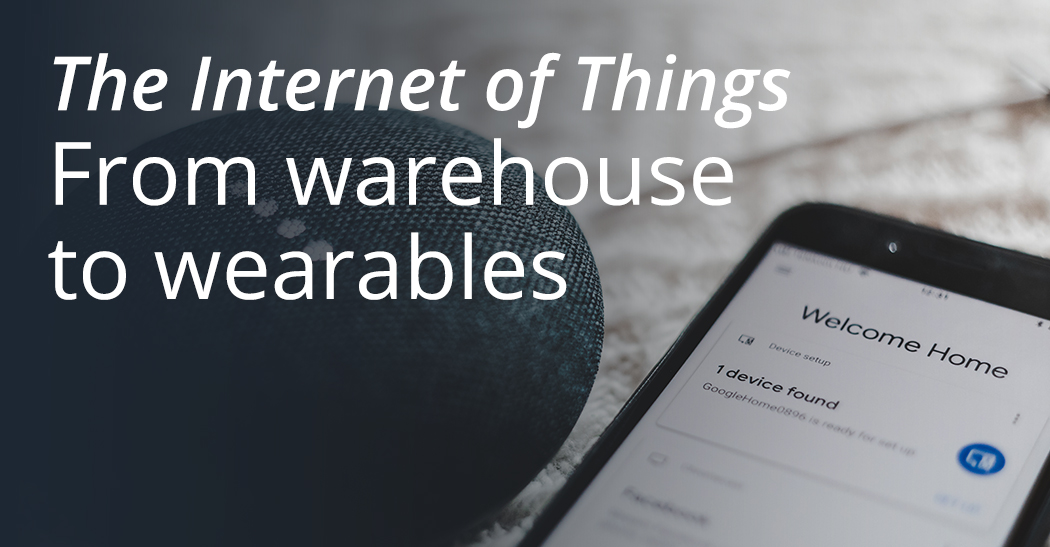 The Internet of Things (IoT) refers to the huge and growing peripheral network of internet-connected devices. These are worn by people, are part of the vehicles we drive and are becoming more common place in our homes, work places and daily lives.

Whilst people typically think of your fridge texting you that your milk is about to run out, there are many use cases for IoT in businesses. We are already seeing innovations improving supply chains through improved monitoring and live reporting of warehousing and deliveries. In the field of facilities management, companies are now saving costs from processes shutting down lighting, devices and machines, as well starting up in the minutes before they are required. In manufacturing, devices are now reporting when fixes and maintenance is required, saving companies costly down time and delays. When it comes to IoT implementations and uses, the list is endless – the global IoT for healthcare sector is estimated to be worth $61 billion by 2020.

An increasing number of devices and data

This huge boom in devices will bring a huge boom in storage requirements. A new field of IT is emerging known as edge computing – the work required on reducing and collating data before it is sent to a central repository. SAP’s Leonardo IoT Bridge was built to solve some of these challenges as the stepping stone between sensors in the field and the core business systems. SAP have announced they will invest $2.2 billion in IoT solutions by the year 2020. Whilst IoT will largely utilise existing technologies, those knowledgeable in the design of these devices and networks will increasingly rise in demand. In fact, there are over 300,000 consultants on Linkedin who describe themselves as just that! With over 320 new IoT devices connecting to the internet every hour, this trend is only set to continue.

As infrastructure and solution providers grow in capability, we will begin to see IoT leverage both existing and developing technologies. Voice-based services are already being used across IoT and this is only set to increase as businesses begin to understand the possibilities. Organisations need to be aware of developing products that could be integrated into their business, but the true innovators will be spending time and money into developing these products themselves.

Blockchain will also start to play a role in IoT implementations as it is built on similar concepts – distributed systems, records of transactions, automated actions following events. IBM Blockchain is beginning to take steps into this area, and give the example of complex logistics systems where smart contracts are used to record and trigger actions as items flow through their network. The result is a transparent audit trail and full accountability. By removing middlemen and intermediaries, these systems also offer huge long-term cost savings.

Making use of IoT outputs

Industries are already benefiting from the huge volumes of data these growing networks provide. Transport for London now have access to real-time daily travel schedules of millions of commuters. This gives them not only estimated numbers of travellers across their network, but a complex picture of journeys across bus, train, underground and tram, allowing them to better respond to incidents and plan for down time.

Global supply chains are also seeing the impact of these developments through asset tracking, forecasting, inventory (from shelves to shipping containers), and again, scheduled maintenance. The businesses that are driving this innovation are seeing huge gains.

Issues with the internet of things

SAP and IT Recruitment Services IT Jobs SAP Jobs

Online shopping has become a big part of the retail landscape and more recently due to the world pandemic, a necessity for many. SAP has a number of solutions to manage e-commerce efficiently, providing better experiences and supporting company growth.