Working as an SAP consultant in Germany 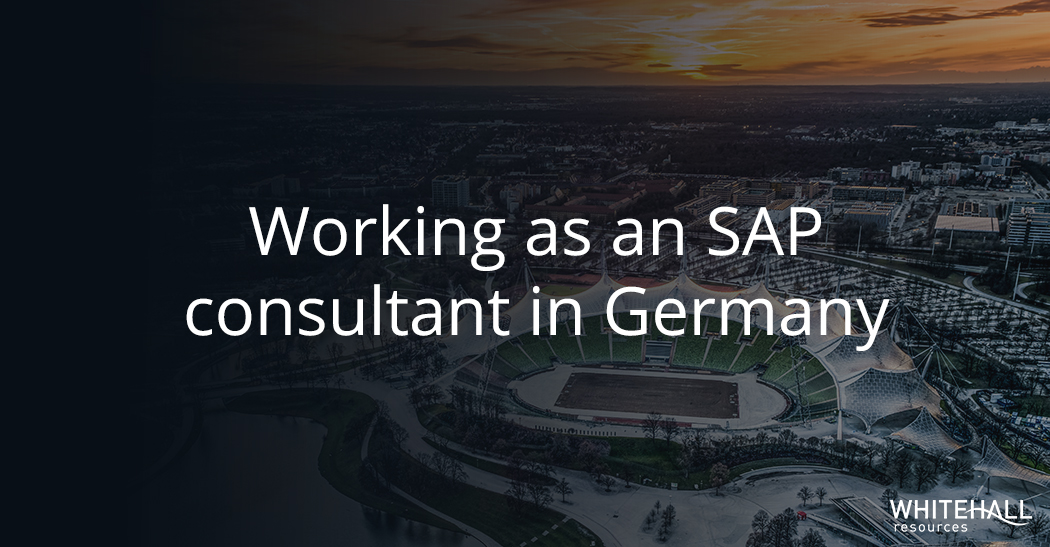 As well as being one of the biggest economies in the world and a founding member of the European Union, Germany is the ninth most visited country in the world due to its beautiful landscapes, opportunities for outdoor activities, worldwide-known festivities and its culture of art, music and science that gave Germany the name of “The country of poets and thinkers”.

As the home of SAP, it has a huge spectrum of opportunities for all experience levels and in different size businesses. Germany is a great option for SAP consultants who are looking to enjoy the lifestyle and career options.

The working environment in Germany is usually very formal but it can depend on the company culture. There is a clear line between work and private life, often meaning no small talk or going out for beers after work. Germans work 1.5 hours per week less than the British but the norm is to dedicate the working hours to work, which means productivity per capita is higher.

An early start is also popular, with some employees choosing to start work as early at 6.30am and leave the office at 3pm – a great idea in the summer when they head out to enjoy the sun. Employees are expected to leave on time, as staying after working hours is not seen as hard-working but more as bad time management and planning.

In larger companies and more traditional industries, people address each other with the formal “Herr” und “Frau” (Mr. and Mrs.) or by their professional titles whilst in younger generations and tech companies, referring to each other by first name is acceptable.

Punctuality is very important. Being on time means arriving at a meeting at least five minutes before it starts.

As the home of SAP, you will find companies of all sizes recruiting SAP consultants throughout Germany, whether they are small consultancies or large multi-nationals. As well as countless SAP consultant positions for all levels, there are a lot of internship and working study programs available. SAP Germany also offers a large number of intern positions every year.

The main cities you will find work in are Munich, Cologne, Dusseldorf and Frankfurt. There are also some large English-speaking companies located in Stuttgart.

See our SAP jobs in Germany

How much do you earn as an SAP consultant in Germany?

Whilst you can expect to get paid more than you would in a similar UK position, the cost of living and the tax you will be paying (and to whom) needs to be factored in.

Hourly rates for experienced freelance consultants are usually €100-150 per hour and for SAP Leads or Architects it ranks around €150-200 per hour. Experienced permanent consultants usually earn around €90,000-125,000 per year, whilst more senior SAP consultants in Germany have annual salary of around €125.000-175.000. There are always plenty of permanent opportunities for SAP consultants with in-depth knowledge of the latest technologies.

Company status, getting paid and taxes

You will be required to have a limited company to work as an SAP contractor in Germany. Your company will be paid for the work you do and will be liable for any currency conversion costs.

If you are paid through an umbrella company, your tax payments will be arranged by them. There are agreements in place between countries to ensure you are not taxed twice (in Germany and back in the UK for example). You will need to seek professional advice from an accountant on this as the rules on where and how much tax depends on a number of variables. You will be also required to complete an annual tax return regardless of whether you are in a permanent or freelance position.

Whether or not you need a visa will naturally depend on your nationality. If required, you can only apply for a working visa once you have received your work contract.

EU citizens are free to work and live in Germany.

Citizens of Schengen countries are able to apply for a Schengen visa.

Non-EU nationals can apply for an EU Blue Card.

As visas are generally linked to a company rather than a specific position, you will need to reapply for a visa if you are changing employers. If your visa is not company-sponsored, you are able to stay in the country until the visa expiration date.

Cost of living in Germany

The cost of living in Germany depends on the city. Munich, Hamburg and Frankfurt are usually the most expensive locations, still the cost of living in Munich is roughly 15% lower than in London whilst other cities like Dusseldorf, Cologne, Stuttgart and even Berlin – the German capital – are cheaper, usually around 22% lower than London and renting is usually 10% lower too. See here for more information on the prices of goods and services in Germany.

Getting around Germany is easy.  Towns have a very efficient and punctual bus network and cities have trams, underground (U-bahn), overground (S-bahn) and inexpensive taxi and Uber services. There is also a huge network of very comfortable regional and high speed trains that enables daily commute and leisure travel. Train connections to other European countries are very easy to organise from Germany and usually also inexpensive. Additionally, there is a number of German airports that can help you travel around.

Cycling is very popular in Germany. Children get a “cycling license” after learning to cycle and to respect traffic rules, and most cities have cycle paths. Cyclists of all ages and in business or evening attire are a common thing.

A car is usually not necessary in big cities. However, if you decide to drive, there are a few things you will need to be aware of:

If you’re a citizen from an EU or EEA country you can drive in Germany using your own national driving licence. A UK driving license is currently valid in Germany, however, there is a possibility that British citizens will be required to follow the regulations for non-EU citizens following Brexit.

Non-EU or EEA citizens are required to get an International Driving Permit (IDP) to be able to drive in Germany and in other EU/EEA countries during stays of up to six months and they must get a German driving license and potentially carry out a driving test after the six months’ period.

When driving in Germany, you are also required to be able to show proof of insurance (third party or above), proof of ID (e.g. passport) and proof of vehicle ownership (V5C Certificate). Drivers are also required to have the following items when driving: warning triangle, headlamp beam deflectors and a first aid kit (compulsory for 4×4 vehicles).

We recommend familiarising yourself with traffic signs and regulations before driving in Germany, especially in regards to speed limits on the motorways – which do exist in some stretches – and right of way at traffic lights and pedestrian crossings to avoid accidents or hefty fines. Abusive language or making derogatory signs whilst driving is fined on the spot.

If you are planning to move to Germany with your family for a permanent SAP position, this could be also an opportunity for your children to access a great standard of education. Schools in Germany are free, and this include some bilingual schools. Compulsory education starts from the age of seven when children attend primary school. Classes run in the mornings only, and kids return to school in the afternoon for extra-curricular activities. When kids reach secondary school, they can choose from five different school modalities depending on their skills or the career path they would like to pursue. After secondary school, pupils can choose to go to university for a small fee or to do an apprenticeship.

The official language is German with 95% of the population speaking either standard German or one of their multiple dialects such as Bavarian or Saxon dialects. New generations also tend to speak English and have an understanding of either French or Spanish.

German companies typically prefer to hire native Germans – this is especially the case if the company is a German-speaking company. However, there are lots of international companies and English speaking teams, therefore you still have high possibilities of being hired if you speak English.

Germans appreciate when foreigners try to learn their language, therefore going on a basic course before starting a contract or enrolling in one of the many language schools in Germany is a good idea. Locals like helping new arrivals improve their language skills.

See our SAP jobs in Germany

Germany is a very traditional country but at the same time very cosmopolitan, with a high number of immigrants mainly from Turkey, Russia, Poland, Italy and Syria, whose languages are also widely spoken in the country.

Germans value order, privacy and punctuality and they adhere to rules strictly. They are assertive and it is part of their etiquette and social duties to keep each other in line, bringing to others attention if they are breaking a social norm such as parking incorrectly. They care about cleanliness and the environment and have one of the most organised systems for recycling, which is thoroughly followed by all citizens.

Weather seasons in Germany tend to be very pronounced, with lots of sun in the summer and snow in the winter, when the beautiful green landscapes, hills and lakes transform from hiking and picnic locations into beautiful and photogenic skiing and ice-skating leisure areas. There are local celebrations held across Germany throughout the different seasons: A carnival called Fasching at the beginning of the year, Frühlingsfest in spring, open-air concerts and festivals in the summer, Oktoberfest in autumn and Christmas markets in winter.

Although football is the national sport in Germany, Germans enjoy a selection of sports such as hiking, cycling, boating, skiing and skating.  Other hobbies include music and art such as playing instruments or painting. Travelling is also very popular.

Traditional German food is very meat based, however, Germany is also one of the countries with the highest number of veganism, vegetarianism and organic food trends and has therefore various food options in restaurants and supermarkets. International food is also popular with lots of Italian, Turkish, Greek and Chinese restaurants, to mention a few.

Overall, working as an SAP consultant in Germany is a great decision due to the lifestyle, travel opportunities, the pay and the availability of work. So what are you waiting for!