Working as an SAP consultant in the Middle East 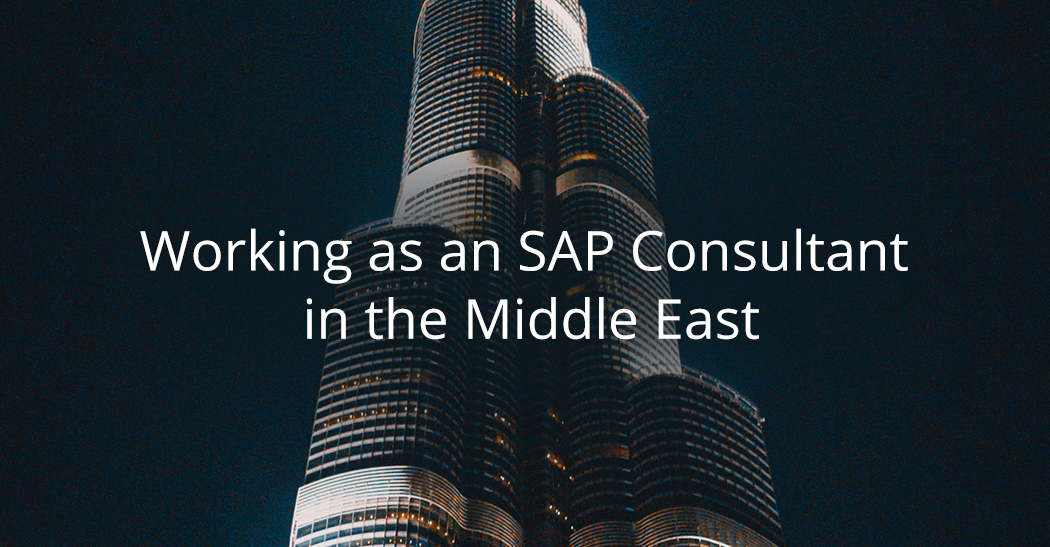 The Middle East is a region composed of Asian and African countries stretching from Egypt to Iran, and from Turkey in the north to Yemen in the south. In this blog, we focus on the area with the largest number of SAP opportunities, mostly in the Arabic countries – Saudi Arabia, the UAE, Qatar, Oman and Kuwait – as well as in Egypt.

Working in the Middle East is attractive for SAP consultants for many reasons; the most cited ones are experiencing a new culture, the climate and the combined benefits of a high pay with low or zero income tax.

SAP contracts in the Middle East

Although the level of experience sought by clients in the Middle East varies depending on project requirements, roles typically require a niche skillset and possibly the newest SAP technologies that local consultants have not yet encountered. Middle East clients are always pushing for the next generation of technology, so a consultant should expect these to come up often in projects. Contractors with global experience are in high demand in the Middle East due the latest technologies and practices they might have gained exposure to.

More junior roles are always available across the Middle East but because of costs, these positions are usually sourced locally or from neighbouring countries to make arrival and integration into the company faster and smoother, due to the locals having an understanding of the cultural differences, project environment and the Eastern way of working. For this reason, if you already have regional experience, it is usual beneficial for the role.

As part of the contract, travel and accommodation are sometimes provided and arranged by the client or are paid in an expenses-included rate and only a flight is provided. There is a wide range of hotels in all Middle Eastern countries so finding either low cost or luxury accommodation is not a problem. You can also find accommodation in ‘Western compounds’ – a kind of enclosed village with housing, and sometimes swimming pools and shops. Within these compounds, the dress code is as you’d expect in any European country.

These can vary from client to client and will, of course, be heavily influenced by your experience, seniority and expertise. Permanent salaries usually pay well, but the big attraction to people looking to work in the Middle East are the benefits that come with the positions. These can include things like housing, car, education allowances for any dependants, bonuses, visas for you and your family, health insurance etc. depending on the hiring company.

SAP Jobs in the Middle East

There is a number of Middle Eastern countries with no personal income tax. This list includes Saudi Arabia, Qatar, Kuwait, Oman and the United Arab Emirates, which are also the most popular countries for SAP consultants. Consultants in Egypt must pay taxes after 183 days of work within a 12 month period. Please note in all cases, you might still need to pay taxes in your country of origin.

The process of getting a visa to work in the Middle East can vary from country to country but as a general rule, you will be required to have a sponsoring company or arrange your visa via a partnering agency. For Saudi Arabia and the UAE for example, the visa to stay in the country is only valid while you work for your sponsoring company, unless your employer gives approval for you to work for a different company under that visa. In Egypt, you are able to apply for a residence permit and for a work visa while already in the country or from abroad.

To avoid dealing with visa issues which ultimately saves them time, money and reduces risks, clients usually prefer candidates from the GCC Region as they can secure a candidate from this region much faster, but as mentioned in our SAP contracts section, expertise can take preference over nationality.

As mentioned, the Middle East is a region made up of different countries and it is therefore rich in cultures and nationalities. This also means different languages: Arabic, Hebrew, Kurdish, Persian and Turkish, to mention just a few, which along with the languages spoken by the large population of foreign workers from other Asian and African countries such as India, Pakistan and Sudan, make the language mix and the local culture even more interesting.

The official language in most of the large Arabic countries is however, modern Arabic, a formal form of Arabic and the language used to do business across the region, which is different from the Egyptian colloquial Arabic, usually spoken in the western parts of the Middle East and in less formal environments.

Locals really appreciate foreigners trying to speak the language, however, English is also widely spoken in the big cities and it is even considered the business language in some of the heavier Western-influenced places Kuwait.

The cost of living varies from country to country. The big areas of population such as Doha, Dubai, Abu Dhabi and Kuwait City are usually more expensive, but they tend to still be cheaper than living in London or any of the big European cities. Amman and Muscat follow with slightly lower costs of living. Jeddah and Riyadh are surprisingly cheaper still, but this is mainly as renting in Saudi Arabia tends to be more affordable than in their neighbouring countries. After that, you’ll find Istanbul and Cairo with noticeably lower costs. Living outside of the big cities is can be a more cost effective option but this is not common practice as transport networks are not widely spread.

Five reasons to work in the Middle East

The Arabic culture is very welcoming and hospitable. Love, loyalty and honouring your family is very important and locals will do anything for family and friends. Arabs enjoy being generous to total strangers who are travelling, and often invite them for tea or a meal at their homes and to meet their family, a tradition that started thousands of years ago when people would travel through the desert.

The Middle East is rich with ancient history and beautiful locations which you can visit on long weekend breaks. Wonders of the world like Petra and the Pyramids of Giza are located in this area, as well as many other Roman, Greek and Byzantine ruins, not to mention the opportunity to see the desert, tropical oasis’ and the man-made beaches in Dubai. Furthermore, you will be able to travel to beautiful countries further East such as Thailand or Indonesia without having to fly long hours.

Forget about the rain and snow. There are only two seasons in the Middle East, summer and winter, which they are jokingly referred as hot and hotter. In the summer, the temperatures can go above 40 degrees, while in winter you can expect temperatures in the 20s during the day and between 10-20 degrees at night. While areas in the north of the region – Turkey, Iran – can experience freezing temperatures and snowfall in the mountains, countries like the UAE, Oman and Yemen, remain a nice temperature all year round.

With lots of different nationalities and a mix of cultures and religions – Judaism, Christianity, and Islam originated in this area – it will give you a real view of what other countries and nationalities are like. Furthermore, the buzz of the big cities, the shopping culture and the charm of local traditions are a must-see. You will be truly enriched by the experience.

Acquiring international experience is a good move at any stage of a career. In the Middle East, you will challenge yourself to compete against companies and executives from a wider range that you would do in the UK or the US for example. Enriching your knowledge could also help you to succeed in the Far East further down the line. Professional experience in the Middle East also looks very good on any CV, as it enhances your ability to take up challenges, work in different cultural environments and build your vast experience as a professional SAP consultant.

SAP Jobs in the Middle East