UK work permits for Europeans before and after Brexit 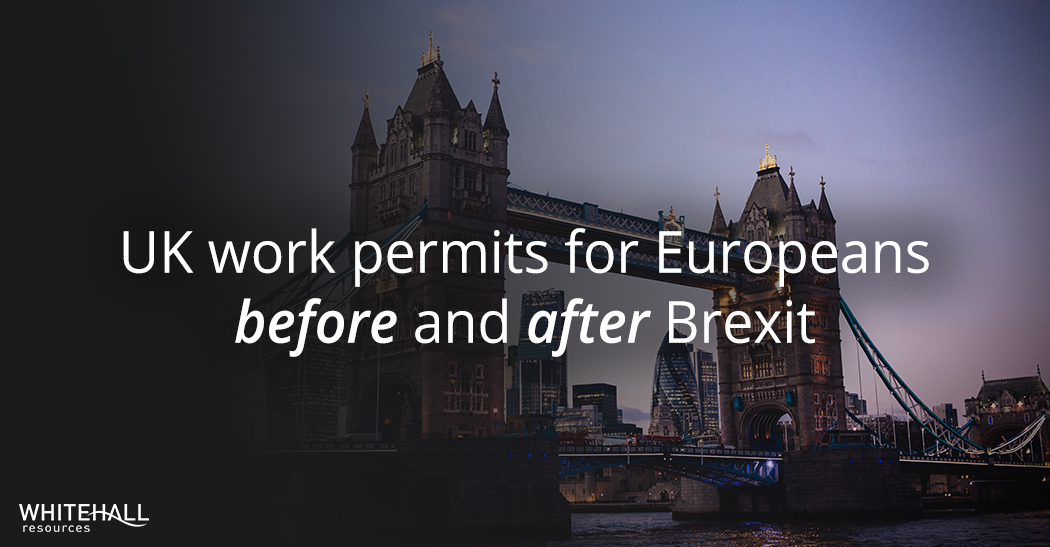 Please find the latest Brexit updates in regards to UK work permits for Europeans on here.

There is a huge number of European SAP, Oracle and IT consultants working in contract and permanent positions in the United Kingdom, but with Brexit around the corner there is a lot of uncertainty in regards to whether Europeans can stay in the country or not, leading to some to return to their homeland and making others unsure about taking on a new job in the UK.

What most people don’t know, is that you can keep your current EU rights in the UK by submitting a simple and straightforward application known as European Settlement Scheme.  Furthermore, if you are European and are planning to move to the UK for a permanent role soon, you are still in good time.

Here you’ll find the details of what you need to do to continue your career plans as an SAP, Oracle or IT consultant in the UK without major disruptions.

Deal or no-deal Brexit – impact on your work permits

The UK has gone through a number of proposals in regards to the terms of leaving the European Union. We understand it can be complicated to get your head around it all, so we have summarised the potential two scenarios to enable you to better understand the importance of arranging your paperwork before the deadlines to secure your UK residency rights.

No-deal – In this scenario, the UK will leave without any economic or political agreements with the EU. It’s also known as “hard Brexit” as it is expected to cause disruptions in the daily operations or organisations until new agreements have been put in place.

Deal – In this scenario, the UK will leave the European Union with a number of agreements in place, meaning the UK and the EU will continue to work together in partnership on certain matters. It’s also known as “soft Brexit” as it is expected to have a lesser impact on the UK-EU relationship.

As hard or soft Brexit has not yet been confirmed, the most important thing is to protect people’s rights either way, and the UK government has therefore created the EU Settlement Scheme,  enabling European citizens to continue living and working in the UK.

EU Settlement Scheme – keep your rights in the UK

Applying to the EU Settlement Scheme is simple, quick and free of charge and can be done on the UK government website or through the smartphone app. If you have been previously charged for this service and you haven’t received a refund, you can now contact the UK government and place a refund request.

There are different nationalities than can apply to the scheme, including some non-EU and non-European if they meet the required criteria.

What rights do I have in the UK under the EU Settlement Scheme?

The general rights under the EU Settlement Scheme are:

European citizens living in the UK

All European citizens from the EEA (European Union, Iceland, Liechtenstein and Norway) and Switzerland currently living in the UK are required to apply to the EU Settlement Scheme to be able to stay in the country after the UK leaves the European Union. This includes citizens with a residence permit, as this is being replaced by the settlement scheme.

You are only exempt from applying if you hold an “indefinite leave to remain” permit or if you hold a British or Irish passport.

The deadline to apply depends on whether the UK leaves with or without a deal as follows:

Europeans intending to move to the UK

If you are intending to move to the UK to live permanently, there is one deadline to enter the country and another deadline to apply for the EU Settlement Scheme.  It is imperative that you are already in the country when applying. The dates depend on whether the UK leaves the EU with a deal or without a deal as follows:

This is a general guidance, please visit the UK government website for further details and applying.

What happens if I miss the deadline to enter the UK?

It is not yet confirmed whether a visa will be required after the EU Settlement Scheme deadlines, however, we can assume that unless the UK government brings in a new visa law for European citizens, they’ll be required to apply for a Tier 2 visa, which is currently the rule for all other countries.

In a nutshell, there are no major changes for European citizens for now as long as they enter the UK before the deadline, so if you are planning to take on an SAP, Oracle or IT job in the UK, you still have  time. If you are interested in working in the UK, please see our job boards for our latest roles. Check back regularly, we add new jobs daily.