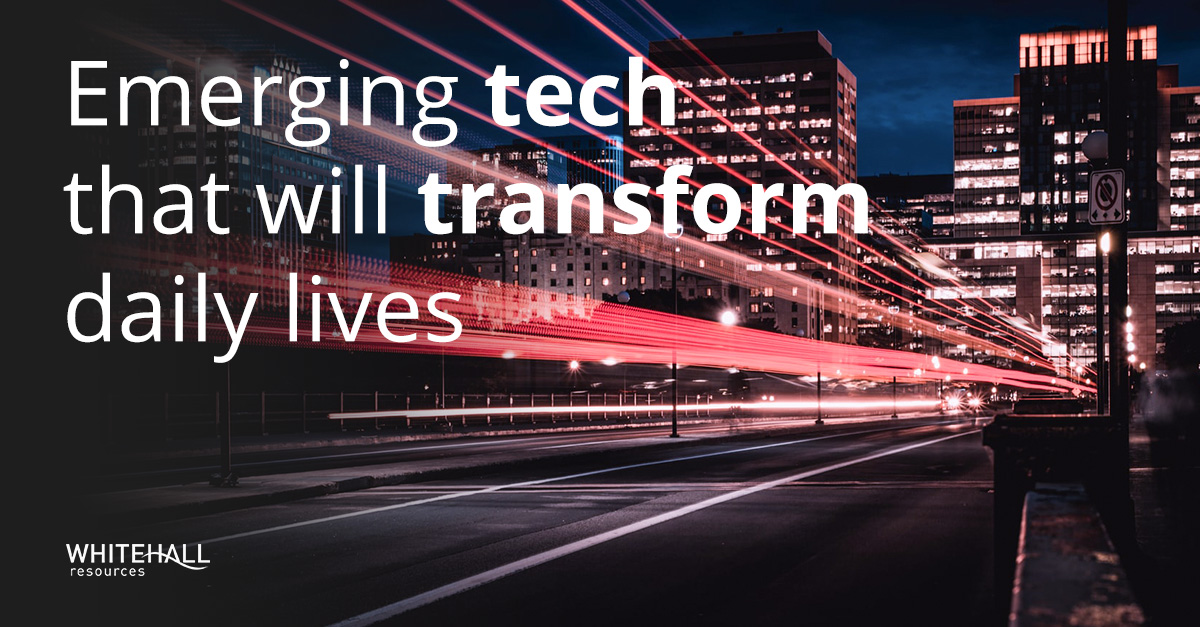 Technology is now an ever-present part of our daily lives, even if we don’t realise. It is a part of our transport, the food we buy and the devices we have all come to rely on. The human drive for progression uncovers discoveries enabling further technological development. Here are a few examples of emerging technologies which we consider will have a big impact in people’s everyday life in the coming years.

Safer food for all

Blockchain has become a key technology in food traceability, enabling businesses and consumers to monitor a product’s source and journey across the supply chain. Furthermore, it has become a helpful tool to identify bad batches of food that have allowed big chains like Walmart, Carrefour and BeefChain to recall products in targeted geographical areas, rather than wasting a huge amount of stock unnecessarily to prevent food poising.
Some of the world’s software houses, such as IBM, Oracle and SAP have all introduced blockchain to their capabilities, with IBM developing IBM Food Trust, Oracle adding Track and Trace to its selection of suites and SAP’s Leonardo digital system that integrates blockchain technologies with existing business software.
Along with Blockchain, the invention of temperature sensor tags is improving retailer’s product quality. Timestrip UK and Vitsab International, both created sensor tags that change colour if the products have been exposed to temperatures outside the recommended range, and Insignia Technologies introduced a sensor that gradually changes colour from when the package is opened until the product is no longer consumable. These two technologies are expected to help businesses maintain standards but also reduce waste, supporting a more circular economy.

Plastic was officially developed just over 100 years ago, when Bakelite, the first fully synthetic plastic was invented. We can agree that plastic is a useful technology, it is versatile and cheap, and has hundreds of applications – but it’s also having a huge negative impact on our planet. Last year, researchers found that the Great Pacific garbage patch is three times the size of France with around 5 billion pieces of plastic floating in the ocean and is expecting to triple by 2050. Currently less than 15% of the world’s plastic is recycled, leaving the rest to pollute the earth, worsening climate change when releasing gases like methane and ethylene, and even harming our bodies via contaminated fish.
As companies are more aware of the negative effects, they are engaging in corporate sustainability. Ikea is using biodegradable packaging made from mushrooms that can discompose in a garden within a few weeks, the Saltwater Brewery created biogradable and edible plastic rings for beer six-packs, and the University of Minnesota is creating polymers that self-destruct when exposed to light, heat or acid. Other biodegradable options made from corn, sugar cane or waste fats and oils have become available in the last few years, but they haven’t achieved the functionality, or the levels of aesthetics of polymer plastic. So the big news is that scientists have now found an alternative after discovering how to break cellulose and lignin from non-food plants, waste wood and agricultural byproducts into monomers, allowing them to produce materials that provide the same mechanical strength of plastic. A few biotechnology companies such as Mobius and Chrysalix Technologies are already working on developing these materials, however, there is still work to be done to reduce the amount of land and water required in the production process, as well as regulations linked to its use and disposal.

See our IT Jobs in the UK and Continental Europe

Artificial Intelligence and the Internet of Things have played an important role in the development and improvement of smart assistants like Siri and Alexa, but engineers are still on the lookout for further AI discoveries, new capabilities and naturally, new applications. Robotics is one of the areas that has had a lot of investment and development in the last 10 years, with various companies perfecting humanoid and non-humanoid social robots.
SoftBank Robotics seems to be in the lead with the creation of Pepper, the first robot capable of recognising human emotions, it also recognises faces and can engage in conversations. Around 15,000 Peppers have been already sold and are currently assisting customers with hotel check-ins, customer service queries in airports and fast-food checkouts. SoftBank Robotics is also the creator of Nao. Nao not only interacts with people but is able to work with autistic children and run exercise sessions in care homes.

The latest generation of robots also function as companions. PARO Therapeutic Robot, a baby seal look-alike robot developed by Japan’s National Institute of Advance Industrial Science and Technology, helps stimulate people with Alzheimer. It responds to its name and actively seeks out eye contact, responds to touch, promoting interaction and reducing patient stress.
There are other robots that function as healthcare assistants – Mabu by Catalia Health engages with elderly patients reminding them to take their medicine, go for walks and call family members and Zenbo by Asus, that can also control connected devices in the home, monitor security and perform various online tasks.
There are currently around 65 million robots sold per year, and as scientists learn to translate human emotions, tone of voice and gestures into algorithms, we can expect more improved social robots in the coming years, a market that is estimated to be worth $19bn in five years time.

There are many other emerging technologies focusing on environmentally-friendly solutions and higher standards of living. Technologists are developing smarter slow-release soil fertilizers that avoid waste and pollution through allowing plants to absorb nutrients as when they need them; finding new methods of renewable energy, and using technology to find the cure to many diseases. Businesses are also actively seeking out technology that provides sustainable solutions. There is a whole generation of scientists, engineers and developers with the same goal: improving human life.

Five IT Podcasts for learning in 2021

There is a podcast for everything these days and IT is no exception. Podcasts are a great way of staying up to date with current trends, news and discussion points in your field of expertise. They can also be a great introduction to new innovations and technologies that you are looking to learn more about….

Five job-hunting tips for IT professionals

The candidate market can seem saturated at the moment with more talented candidates looking for work than ever before, and seemingly fewer jobs available than before. Whilst times are undoubtedly difficult, the teams at Whitehall are definitely seeing more businesses hiring again, and projects that were previously put on hold are now back on track….