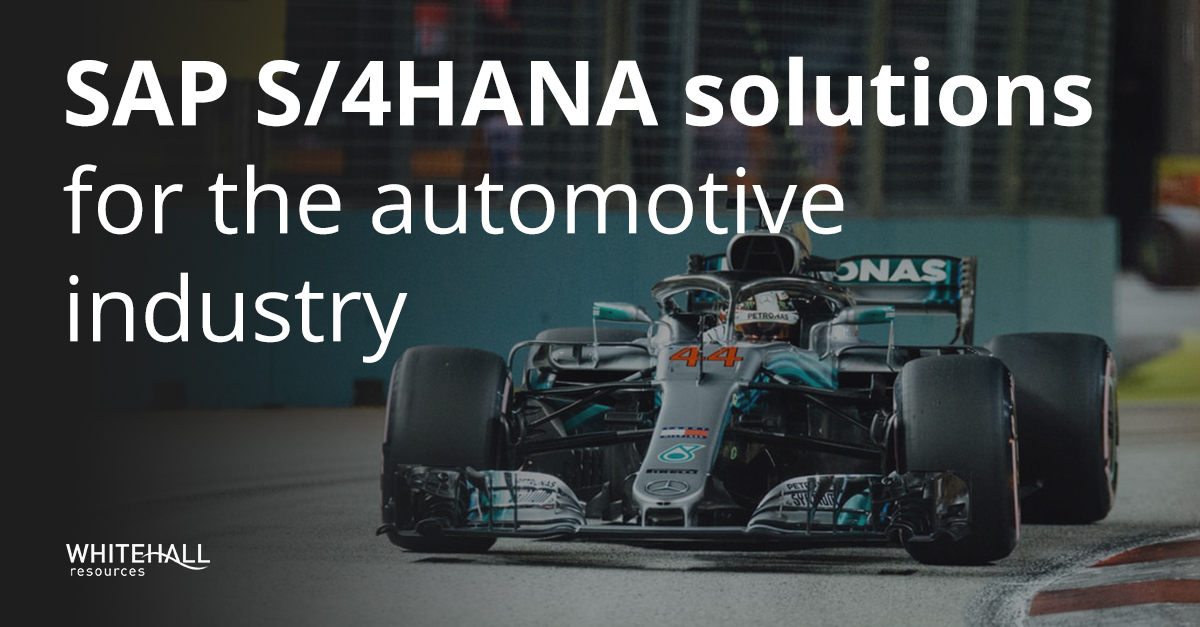 Selling a world-class vehicle is no longer enough in the automotive industry. Customers are looking for leading-edge technology and unique customer experiences, encouraging automotive manufacturers to modernise their production processes to be able to deliver.  Companies like Indus Motor Company, Goodyear and Mercedez-Benz are solving this challenge with the support of SAP’s S/4HANA, focusing on smart manufacturing, digital supply chain and services mobility.

Indus Motor Company’s journey to transformation began in 2015, when the company decided the SAP systems they have been working with since 2004 were no longer enough to manage the business. They dedicated six months to evaluate the ERP landscape, including Microsoft Dynamics, Oracle E-Business Suite and SAP S/4HANA. They finally took the decision to upgrade to S/4HANA due its in-memory capabilities not offered by SAP’s competitors at the time, which allowed real-time reporting and data centralisation. Furthermore, upgrading to a new version of SAP meant it would be easier for the users to adapt to the new SAP system, rather than to a completely new provider.

Some of the primary benefits Indus Motor Company received from the upgrade are:

Better Materials Requirements Planning – The process of running their MRP used to take four hours, it now takes 12 minutes and helps them avoid lost production that could cost an estimated $250,000 annually.

Efficient closing of books at the end of a financial period used to take eight days, it now takes three days and is saving the company up to 800 hours per month, which translates to nearly $200,000 in employee time per year.

Quality management – Consolidating defects could only be done at the end of each week, the correction is now done immediately, saving a company $10,000 per minute in lost production.

It’s worth mentioning that for this transition, Indus Motor Company decided not to migrate its old data to the new system as a strategy to streamline the implementation. With the new platform, they have put new processes in place, improving and modernising the company.

Goodyear is one of the world’s largest tyre companies, employing around 64,000 people across six continents. Before moving to S/4HANA, the manufacturer was running separate ERPs in over 45 sites in 21 countries. Following SAP’s original announcement to cancel maintenance for SAP ERP Central Component by 2025 – now changed to 2027, Goodyear decided it was time to leverage the latest SAP technologies and to simplify and standardize their applications architecture to support business requirements.

Since Goodyear was running in multiple ERP systems, they decided to take a hybrid approach, making their first deployment a new implementation in finance, an implementation that has allowed users to provide fully transparent and highly detailed comparable data globally for the first time in the history of the company.

Goodyear has made this upgrade through deploying SAP S/4HANA on SAP HANA Enterprise Cloud.  This allows them to focus on processes and business plans while leaving the management of S/4HANA to SAP. Goodyear is currently using finance and plan for central procurement, SAP Analytics Cloud, SAP SuccessFactors, SAP Concur, and SAP Fieldglass solutions. Finance professionals no longer make decisions based on yesterday’s numbers, they now make better and more informed decisions based on real-time data.

As mentioned by Horst Ebert, vice president of Global IT at Goodyear, during a recent SAP panel discussion, Goodyear plans to add more business processes and innovations to continue the journey to become an intelligent enterprise, following this successful initial implementation.

In the latest ABB FIA Formula E Championship celebrated in Saudi Arabia, the Mercedez-Benz EQ Formula E team debuted with two fully-electric racing cars. Building a Formula E car involves complexity, advanced technology and specific car parts, it requires efficient procurement processes, as well as thorough supplier evaluation and business performance monitoring. The use of S/4HANA and its tailored solutions has enabled the Mercedez-Benz EQ Formula E team to analyse large volumes of data and manage this process effectively. When it comes to competing on the tracks, Mercedez-Benz makes use of the SAP Sports One solution to monitor, understand and act on human performance through fitness trackers and other wearable technology.  The collection of the drivers’ biometric data allows the team to have visibility of their health, sleeping patterns and hydration levels, as well as coordinate and manage training, talent development and medical processes to ensure performance at the highest level. Take a look at other sports gaining a competitive edge with SAP.

The strong partnership between SAP and automobile brand Mercedez-Benz has opened a range of opportunities to develop technologies in other areas such as retail. In recent years, Mercedez-Benz’ parent organisation Daimler AG, in partnership with SAP Consulting and students at the University of Applied Science, developed the car detection app for their Mercedez-Benz’s customers. The app, which uses recognition algorithms that run on SAP Leonardo Machine Learning, allows users to take a photo of any car they like while being out and about, and displays Mercedez-Benz cars that best match the photo, as well as the nearest car dealerships. Whilst it might sound like a too-simple app for a generation that can control homes and cars from their phones or through voice orders, the technology behind it involves a lot of data storage and AI technology. It is after all the user-friendly characteristics, aligned with the users’ expectations, that makes apps for customers successful.

89% of millennial new-car intenders who currently own a vehicle with an “infotainment” system are willing to pay for software updates that improve or add functionality to their vehicle. – IHS Automotive

By 2030, more than one in three kilometres driven could involve shared driving. – PWC

S/4HANA solutions for the oil and gas industry

The oil and gas industry has SAP-tailored upstream and downstream solutions that include operations, retail, management and distribution.

The benefits of transitioning to S/4HANA